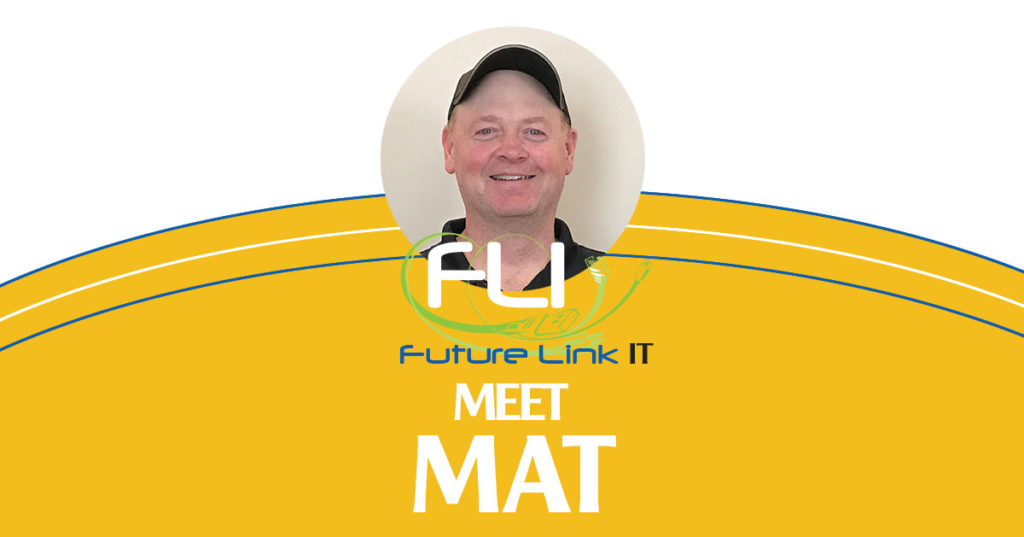 Mat Mingl joined the Future Link team in 2000 via a bit of a circuitous route. He didn’t start off in IT, though the subject had always fascinated Mat — so much so that he taught himself about it. Mat began his career as a machinist but found he didn’t like being inside. So he began working for an animal trapping company which allowed him to work outdoors.

Mat’s brother and mother were working at the Glenwood Home for Boys. Now known as Glenwood Academy, this residential education campus provides children between second and twelfth grades with the skills, support and resources to overcome inequality, poverty and injustice. Mat and his wife got involved by volunteering.

Ultimately, the leadership asked if the couple would be willing to live and work at the school. It was a partnership that lasted nine years and resulted in a great deal of growth for Mat in childcare and development. He credits that experience with helping him learn how to raise his own kids.

He started at Data Moving Company, a wireless and internet service provider, doing installs. The transition was an easy one for Mat. He was already working outside trapping animals, so he already had the truck and ladders. Switching to installing internet service also allowed him to connect his love for working outdoors with his interest in technology/IT. Eventually, one of the owners wanted out so Mat bought it and became part owner.

Currently, for Future Link, Mat focuses a lot on maintenance and the operational side of the business. He takes calls, answers customers’ questions and assists with management. Mat is very customer-centric and proud of the reputation that he’s helped the company build.

For much of his time at Future Link, Mat has been solely responsible for that side of Future Link’s operations. Until recently, he was the only team member dedicated to that part of the team with only occasional assistance from a contractor.

His dedication to Future Link was evident from the beginning of his tenure here. He put in a lot of late nights and was basically on-call 24 hours a day. With his help, the company has grown exponentially in the past year and now serves about 500 customers with high speed internet, WiFi and DSL.

Outside of work, Mat’s interest in helping others continues. His parents live on the same farm where he grew up. When he’s not working, Mat often helps his parents maintain it. He also likes to hunt and fish.

A technology team working for you! Future Link of Illinois has been providing internet service for homes and businesses for 10+ years — with better service and at better rates than our competitors. Find out if we service your area here.

Or schedule a call with one of our team’s experts, like Mat, here.